Soils range in quality and texture and Manaaki Whenua scientists have been researching, mapping, assessing and recording New Zealand's soils to measure its condition, identify risks and share this information with a wide range of people, including farmers, community groups, and councils, using a digital information system called S-map online.

"S-map online started in the mid-2000s when there was a push to digitise paper soil mapping records and help those using our soil understand it better by accessing information on historic and new soil records for the wide variety of New Zealand soils," says Sam.

"The primary focus up to now has been mapping land with high production potential that is most likely to have the most intensive land use pressures. S-map has managed to map half of this land," he says.

Recognising the national importance of quality soil information, the Fertiliser Association has combined with several regional councils to support the improvement of soil water data that S-map supplies to end-users - or which are used in models such as Overseer. Over the last 25 years, soil water measurements have been completed at many sites.

"This data has largely lain forgotten in old reports and records, but in the past year we've been uploading data from 262 legacy sites into the National Soil Data Repository, recovering over $2.6M of previous public investment that is of critical importance to today's decision-makers," says Sam.

By June the number of sites with soil water data in the Repository will have more than doubled to around 700.

"This will help significantly improve the models that supply soil information in S-map."

Over the next two years the NextGen programme will be carrying out more new measurements to fill data gaps on key soils such as the pumice soils in the Waikato region, as well as further sites in the Waikato, Hawkes Bay and Wellington regions. Watch out for further improvements over the next few years.

To inquire about the research, contact Sam Carrick at carricks@landcareresearch.co.nz. 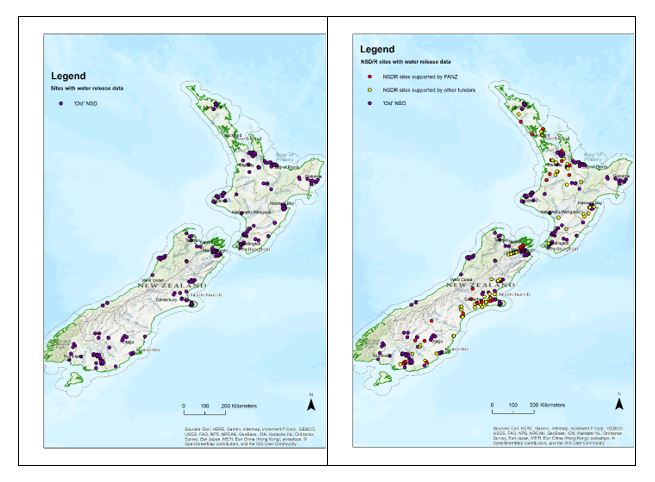 Left: Locations of the existing 313 sites with soil water data in the NSDR.

Right: Locations of the 262 legacy sites that have been rescued and uploaded into the NSDR through the co-funding consortium, including the Fertiliser Association.

You can now find a revised version of the TFMS under the 'Tools' section of our website.

In January, FANZ released its submission on the Climate Change Response (Emissions Trading Reform) Amendment Bill. We continue to support development of a predictable transition pathway for reducing carbon emissions for NZ agriculture.