Not all forage species are created equal, a recent PhD graduate has discovered. 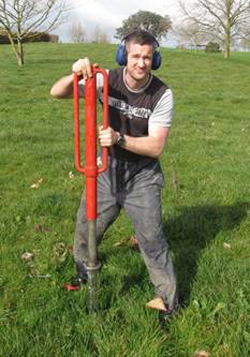 Aaron Stafford, who graduated with a doctorate from Massey University in May, discovered that concentrations of cadmium accumulated in chicory and plantain were at least 10 to 20 times higher than ryegrass and white clover.

“Grazing livestock that ingest these plants have a potentially elevated risk of increased cadmium accumulation in their livers and kidneys,” says Aaron.

Cadmium is a naturally occurring metal found in trace levels in water, air and soil. It is found at various levels in phosphate rock, from which phosphate fertiliser is derived. Accumulation of cadmium in agricultural soils, and in pasture, fodder and horticultural crop species is an ongoing management issue for agricultural and horticultural production systems around the world. Long-term dairy farms in some of New Zealand’s most productive farming districts (e.g. Waikato, Bay of Plenty and Taranaki regions) tend to have higher soil cadmium levels than other regions of New Zealand. This is due to their history of intensive farming and phosphorus fertiliser use over many years. The soil cadmium levels are thought to be predominantly a legacy of phosphate applications during the period from 1950's and 60's through to the mid 1990's when fertiliser cadmium concentrations were higher.

“This does not mean that these soils are ‘high-risk’ for plant cadmium uptake and exposure in animal and human diets,” says Aaron. “Many factors influence soil cadmium availability, such as soil pH and organic matter content. As a result, plant cadmium uptake can still be greater in some soils at low ‘background’ soil cadmium concentrations. My work demonstrates that plant species can be a major factor influencing livestock dietary cadmium exposure.”

Aaron did experiments on two long-term dairy farms on contrasting soils in the Waikato and Canterbury regions. One of his main goals was to understand how different forage species accumulate cadmium from the soil. His work also contributed to building up a better data set for researchers to work from in future.

“This information can help us understand what, if any, risk there is to grazing animals,” says Aaron. “There’s been a lot of historical work on cadmium done in New Zealand focused on grass/legume based pasture, but little in the past 20 years when I started doing the work. Forages grown in livestock grazing systems have changed a lot in that time. My research reappraised what we know about cadmium and its variability in the landscape, and factors which control its availability in the soil and exposure to grazing livestock.”

To avoid the risk of cadmium entering the food chain, the sale of offal from ruminant animals older than 30 months is prohibited in New Zealand. “My research raises the question of whether animals that are grazing really high cadmium crops may need to be screened out earlier. There would need to be further research to determine how much earlier, however. More work is needed to understand the impact of some of these high cadmium forages and the risk from animal ingestion.”

Aaron says it is important to know the phosphorus-fertiliser application history, cultivation history, and soil type variation of any land that is being managed for farming. “This information will help farmers work out where cadmium might be in the landscape and how to manage it.”

In the future he would also like to see research on how to breed varieties of chicory and plantain that accumulate lower cadmium concentrations.

The award recognises the efforts and present (or likely) contribution to New Zealand soil science arising from a doctorate study. It carries a $5,000 one-year stipend.

Her postgraduate research has seen her lead a long-term field study on soil and catchment hydrology in Southland. The findings will help understand the role mole and tile drains play in Southland’s unique landscape.

“I’m thrilled to have been selected as the recipient of the NZSSS Fertiliser Association Postgraduate Bursary, it is an honour that I will cherish for the rest of my career,” says Kirstin. “I love working with soils and my career objective is to apply my field, research and management skills towards supporting the sustainable management of New Zealand’s soil resources.”

“My PhD has been challenging but also so rewarding, and this award is a real confidence boost as I prepare to start my new career at Manaaki Whenua Landcare Research in February. I wouldn't be where I am without the support of my many great mentors, friends and colleagues, who have given me so much of their time and energy to help turn ideas into reality and put it all into the written word!

“It's truly been the best experience of my life and I am really looking forward to where it is going to take me.”

Kirstin was nominated by Peter Almond, Associate Professor, Department of Soil and Physical Sciences at Lincoln University. He described her to the judging panel as a “highly adept scientist capable of complex quantitative analysis of soil-hydrological systems”.

“I think she is a deserving recipient.  The prestige of the award would further her goal of securing a position working professionally in soil science in New Zealand so that she can contribute to environmental sustainability of our primary industries.”

“The more we can understand what’s happening in our soils and catchments, the better placed our primary sector will be to improve farm management, all while protecting the environment.”

FANZ has made a submission to the Ministry for the Environment on Te hau mārohi ki anamata - Transitioning to a low-emissions and climate-resilient future.

The primary sector has a key role to play in helping achieve global reductions in greenhouse gas emissions while maintaining food security. This requires low-emission production systems, with increased efficiencies and the use of new mitigation technologies.

Investment in the development and adoption of new technologies requires a clear regulatory pathway to market. We will need to work internationally with trading nations and also locally with existing qualified networks within the agricultural community for the extension and adoption of new mitigations.

You can read our submission in full here.