Significant reductions to nitrogen (N) leaching can be achieved by changing irrigation management practices, and new research has demonstrated just how big those benefits can be. 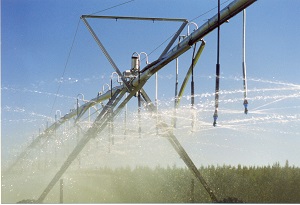 A desktop study led by Dr John Bright, Director Research and Development at Aqualinc Research Ltd, and funded by the Fertiliser Association of New Zealand, has shown that it is possible to achieve an average of 27% reduction in N loss.

The research examined data from 12 case study dairy farms in Canterbury. Using computer models, including Overseer, the researchers were able to investigate the effects of different irrigation management rules on pasture production and nitrogen leaching. The researchers experimented with a different approach than the current practice of irrigating if the soil moisture content drops below 50% of its plant available water.

“We looked at lower irrigation trigger points to see if they provided any benefits,” explains John. “This meant the soil was allowed to dry out more than usual. We also looked at different irrigation targets – varying the soil moisture content we aim to achieve through irrigation.

“We looked specifically at targets that left quite a bit of capacity in the soil to store rainfall should it occur shortly after the irrigation finished. We found that filling it up to 80% of the plant available water capacity and leaving 20% for rainfall was probably the best target level from the point of view of reducing the nitrate leaching substantially while avoiding pasture production losses.”

John was “pleasantly surprised” by the results. “Before we started the project we didn’t know what the impact would be on pasture production, but this was not compromised. We were even more surprised by the consequences of changing the trigger level. We found we could use a much lower soil moisture trigger value in spring and in autumn without having any significant effects on pasture production. This was critical as it allowed the soil to dry out more by delaying irrigation and increased its capacity to store rainfall.”

The research team also deliberately tested target levels that did cause a reduction in pasture production to gauge the limits for irrigation triggers and targets. Applying the principles of adjusting trigger levels during the season and using an 80% irrigation target requires the appropriate irrigation system. It is essential to have a system that can be adjusted to relatively small application levels, with a short return period. Centre pivots and solid set sprinkler systems were found to be the most suitable irrigation methods. These could most easily be operated using the irrigation rules developed through the research.

Other benefits besides reducing nitrogen loss to water include reducing irrigation water use through improved efficiency and making more effective use of rainfall when it occurs.

“You do have to put more effort into monitoring soil moisture and using that information on a daily basis to figure out whether to irrigate or not, and exactly how much to put on. But at the end of the day, many Canterbury farmers are required to make significant reductions in N losses to water in the next few years. For some farmers, it may be possible to achieve some or all of these reductions simply by changing the way they manage their irrigation system.”

The 2022 AgriTechNZ Baseline of Digital Adoption in Primary Industries report was released in August.

Created as part of a study by AgriTechNZ and insights partner Research First, the report was co-designed with partners The Fertiliser Association of New Zealand, Zespri, The Foundation of Arable Research and DairyNZ. It was also supported by the Ministry for Primary Industries as part of the Sustainable Food and Fibre Futures initiative (SFFF).

The 60-page report looks at digital adoption, including key drivers and barriers across the dairy, horticulture, arable and beef/sheep sectors.

The British Society of Soil Science has published a research article in the Soil Use and Management Journal detailing the latest analysed data from the long-running Winchmore Fertiliser Trial in Canterbury.

The paper was written by Driss Touhami of the Faculty of Agriculture and Life Sciences, Lincoln University. Touhami is also a member of the AgrioBioSciences Program, Mohammed VI Polytechnic University in Ben Guerir, Morocco.

The paper, titled "Effects of long-term phosphorus fertilizer inputs and seasonal conditions on organic soil phosphorus cycling under grazed pasture", was co-authored by Leo Condron Richard McDowell and Ray Moss.  The report can be viewed here.

Read more about the long-running Winchmore trial on the FANZ website here.