Measuring the impact of soil fluorine

Thangavelautham Geretharan (Gere) is pioneering research in an aspect of soil health that has largely been ignored until now – fluorine’s impact on nitrogen-fixing bacteria. 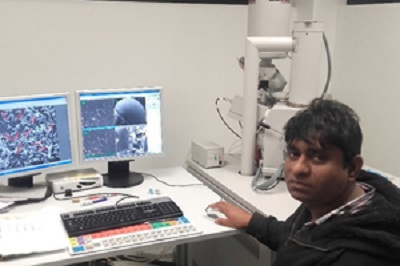 The Sri Lankan PhD student says he was interested in measuring its effect, given nitrogen-fixing bacteria are a fundamental part of New Zealand’s legume-based pastoral farming system.

Nitrogen is essential for the growth of plants. Nitrogen-fixing bacteria are microorganisms present in the soil or in plant roots that change nitrogen gases from the atmosphere into nitrogen compounds that plants can use in the soil.

Gere’s research builds on a new and simple total fluorine measurement method, sodium hydroxide extraction, which was commissioned by the Fertiliser Association and developed by Jeyakumar and Anderson in 2015. “I found that sodium hydroxide extraction is a suitable method for determining the total soil fluorine content,” says Gere. “I also used calcium chloride and water extraction to measure the amount of the total soil fluorine that is actually available to affect living organisms.”

Gere focused on measuring the toxic effects of fluorine on nitrogen-fixing bacteria and its interaction with white clover – a widely cultivated pasture legume in New Zealand.

“Encouragingly, my research so far seems to indicate no imminent risk from soil fluorine on nitrogen-fixing bacteria. I also found that the fraction of the soil fluorine content that is potentially affecting the living organisms is very small in New Zealand agricultural soil.

“Once I’ve completed the research, my findings will be very useful for developing fluorine guidelines for New Zealand agricultural soil.”

Gere commenced his PhD in April 2016 under the supervision of Professor Christopher W.N. Anderson, Dr Paramsothy Jeyakumar (Jeya) and Dr Michael Bretherton through the School of Agriculture and Environment at Massey University. His research is funded by the Fertiliser Association of New Zealand.

The British Society of Soil Science has published a research article in the Soil Use and Management Journal detailing the latest analysed data from the long-running Winchmore Fertiliser Trial in Canterbury.

The paper was written by Driss Touhami of the Faculty of Agriculture and Life Sciences, Lincoln University. Touhami is also a member of the AgrioBioSciences Program, Mohammed VI Polytechnic University in Ben Guerir, Morocco.

The paper, titled "Effects of long-term phosphorus fertilizer inputs and seasonal conditions on organic soil phosphorus cycling under grazed pasture", was co-authored by Leo Condron Richard McDowell and Ray Moss.  The report can be viewed here.

Read more about the long-running Winchmore trial on the FANZ website here.

The award recognises the efforts and present (or likely) contribution to New Zealand soil science arising from a doctorate study. It carries a $5,000 one-year stipend.

Her postgraduate research has seen her lead a long-term field study on soil and catchment hydrology in Southland. The findings will help understand the role mole and tile drains play in Southland’s unique landscape.

“I’m thrilled to have been selected as the recipient of the NZSSS Fertiliser Association Postgraduate Bursary, it is an honour that I will cherish for the rest of my career,” says Kirstin. “I love working with soils and my career objective is to apply my field, research and management skills towards supporting the sustainable management of New Zealand’s soil resources.”

“My PhD has been challenging but also so rewarding, and this award is a real confidence boost as I prepare to start my new career at Manaaki Whenua Landcare Research in February. I wouldn't be where I am without the support of my many great mentors, friends and colleagues, who have given me so much of their time and energy to help turn ideas into reality and put it all into the written word!

“It's truly been the best experience of my life and I am really looking forward to where it is going to take me.”

Kirstin was nominated by Peter Almond, Associate Professor, Department of Soil and Physical Sciences at Lincoln University. He described her to the judging panel as a “highly adept scientist capable of complex quantitative analysis of soil-hydrological systems”.

“I think she is a deserving recipient.  The prestige of the award would further her goal of securing a position working professionally in soil science in New Zealand so that she can contribute to environmental sustainability of our primary industries.”

“The more we can understand what’s happening in our soils and catchments, the better placed our primary sector will be to improve farm management, all while protecting the environment.”